Version 2.1 focuses on extending Trickster’s usefulness through interoperability with OS X and other applications on your Mac to make it better fit your workflow. It also brings voice-over support. Some bug were fixed as well.

To learn how to use the automation features and see some examples, read this article on our blog.

Trickster, in version 2.1, adds extensive support for AppleScript and other ways to interact with the application. This way you can make it more useful and adapt it to your workflow. Read below if you’re interested to learn how you can benefit from this, including sample scripts.

With a System Service “Add to Trickster”.

Either select files in Finder or similar apps or select text that contain paths to files and use “Add to Trickster” service.

Use trickster-add-recent://fullPath to add the file at fullPath to Trickster.

For example, use in the Terminal as:

For another example, click here to add Preview application to Trickster on your Mac.

The items can also be file objects and not only string paths.

There’s a command refresh entries that forces Trickster to sort its recent entries without opening Trickster’s window. You’ll probably want to use it before getting recent entries.

The list of all recent files (no filters applied) is available in entries elements of application object. A specific item (in this example, the first one) can be retrieved directly with the following AppleScript command: get path of entry 1

The selected items are available as selected entries property of the application object. The path to the first selected file can be retrieved with the following script:

The entry object contains the following properties of the file:

All of this information is available in the AppleScript dictionary which can be opened with AppleScript Editor.

As a user of LaunchBar I wanted to create a way to send files quickly from Trickster to LaunchBar. I also use the fabulous Keyboard Maestro, which lets me assign hot keys to call these scripts. As an alternative to Keyboard Maestro, you could use FastScripts from Red Sweater, if all you need is call AppleScripts.

The scripts were written with the help of Brett Terpstra and Eugene Gordin.

Script to select the most recent file in LaunchBar:

Script to get selected items in Trickster and put into LauchBar for further processing there:

I assigned both scripts to ⌃⌥Z in Keyboard Maestro. You’re welcome to download them.

I also created a custom search in LaunchBar that uses the special URL scheme to add a file from LaunchBar to Trickster. I called it “Add to Trickster”, and can invoke with at. I suppose similar actions can be performed with Alfred or other launchers.

Another usage pattern that Brett suggested is saving these scripts as files in scripts folder for LaunchBar, thus making them available right from within LaunchBar.

You can also create scripts to copy most recent files to the clipboard, for example.

I hope you find it useful in your workflow.

Maybe you can think of new ways to use Trickster’s automation. If you think something is missing and you want more automation functionality, let us know.

A direct release of Trickster version 2.0.2 is available now. A Mac App Store version is not yet released.

The new version brings full support for the Retina displays on the new MacBook Pros. It also adds a number of new usability features and lots of bug fixes.

Not many people have the Retina Macs yet, but we wanted to delight those who have them and also be ready for future updates to the Mac lineup. Trickster looks gorgeous on the Retina. Sorry, only a portion of the screen can fit the space on the blog.

Full release notes are below the screenshot. 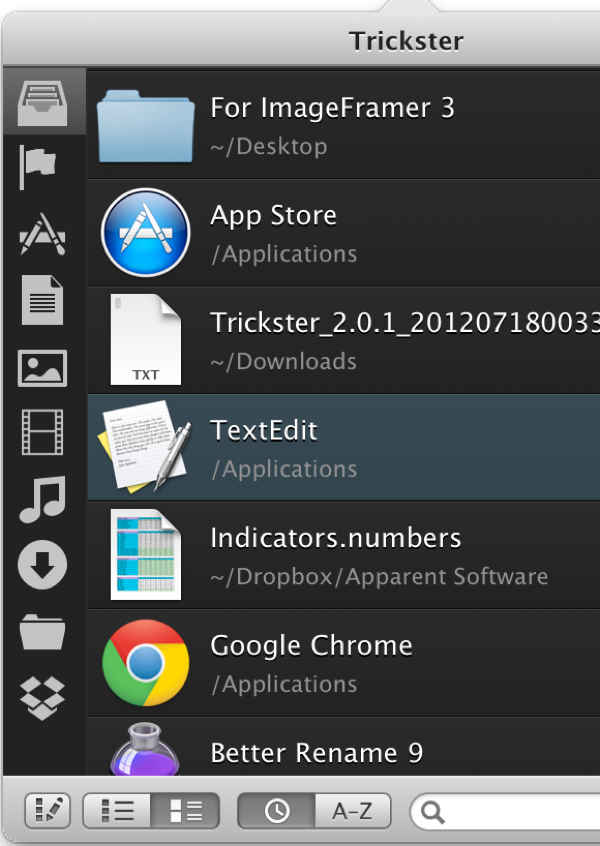 You can download Trickster from our site or use the built-in update mechanism to update your copy.