So I’m back from NSConference.

Wow, it was a much exciting experience for me, for several reasons. I’ve entered the Mac development arena about 3 years ago but I’ve never been to any developer conference. WWDC is too far and expensive for me. So when Scotty first announced about it I thought it’d be nice to get there. Fortunately, it worked out.

First I’d like to thank Scotty an Tim because I was probably one the most problematic of their visitors. I came to UK with my wife, so we couldn’t stay in the regular accommodations and I’ve continuously bothered them both about my issues with it and the banquet. They were both very helpful and kind with me.

The sessions were all well selected and on high level. The speakers were of the highest quality both knowing and entertaining. Matt Gemmell ’s talk about custom controls was helpful as I have created a couple custom controls myself for ImageFramer 3. Fraser ’s talk about integrating with Apple’s photo programs was also just what I needed since ImageFramer is a program for photographers as well and I don’t have any integration at this time.

Some other talks that I liked are Mike Lee’s Pimp my app sessions, which was both entertaining and helpful. I like these business and user experience related stuff and Mike’s a great speaker. After the conference I caught him for several questions and he was glad to discuss things.

F-Script session was very interesting. Although I’ve looked at F-Script myself beforehand, Philippe Mougin excited the audience with its abilities and I sure learned quite a few things myself.

All other sessions were helpful and entertaining as well.

The night after the conference, laying in bed I couldn’t fall asleep and ideas floated into my mind how to make ImageFramer 3 better. The new knowledge and enthusiasm all fused into one and I’ve had quite a few helpful ideas. Yes, nerdy, I know, but sometimes good ideas about programming come at this time.

Huge thanks to Scotty, Tim and other people involved. I now wait for NSConference ‘10.

The only thing that I didn’t like were these British water taps. How in the world am I supposed to wash my hands this way? We’re in 21 century and it’s a new building. Can’t put the mixing faucets, for crying out loud!? I know, it’s the same in London and it’s some British thing but someone, please explain why it’s this way and how to use it effectively. 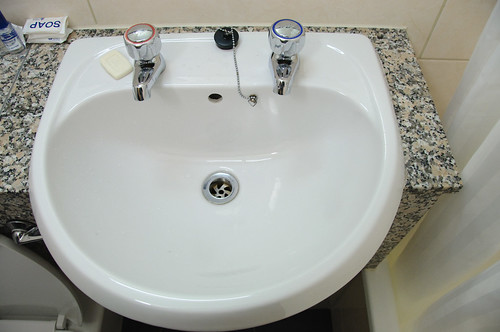 (the photo above is from my hotel room in London)

I you just happen to want to see some of my photographs from the UK trip, take a look at: London and Oxford set on flickr. There might be more later as well.