Today we had two small releases:

Everyone is encouraged to update, although not all will see the immediate benefits.

The new Cashculator 1.2.2 adds support for switching databases which are located in different folders. This allows using multiple copies of Cashculator on different Macs and share the same database, for example, with the famous Dropbox service.

This also opens the possibility to have multiple Cashculator databases and switch between them. For example, you might want to split your business and personal databases, if you share the business database.

To switch to another existing database, in Cashculator’s preferences you change the database location like previously. But now, if the selected folder already contains a database, in additional to “Cancel” and “Overwrite” commands, you have a new option: “Use existing database”. If you click it, Cashculator will immediately restart itself with the database in the selected folder.

Other changes in the release include:

As always, use auto-update in your current Cashculator copy or download from http://www.apparentsoft.com/cashculator/download

Cashculator 1.2 brings three main changes to Cashculator, all of which were driven by our customers’ feature requests and our own vision. These are:

You can now export the amounts that you see in the cells as a CSV file. A CSV file can be opened by all spreadsheet applications. Cashculator defaults to exporting what you see right now in the table – the selected scenario, current screen (income or expenses), current filter for the view (Plan, Actual or Combined) and the horizon. Cashculator will even propose a file name for your export based on these values. If you want, you can still modify the screen and the filter in the save dialog: 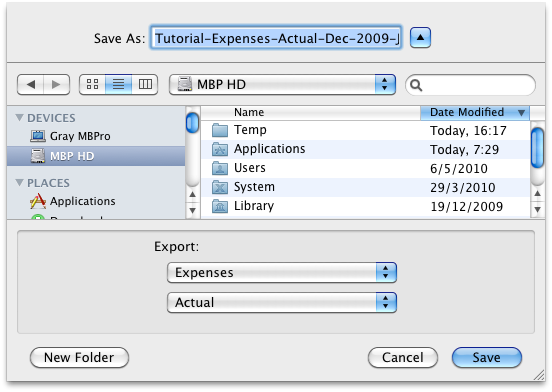 This is a major but non-intruding improvement to how you can keep track of your transactions. While for the sake of simplicity Cashculator doesn’t keep separate transactions, you could keep simple records by writing expenses as sums, for example, you could write in a cell “100+200” and you’ll see 300 but pressing Enter on the cell would show you the 100+200 string and you could add to it. Yet, when this list grows you might not remember what these numbers mean. This was especially true for multi-month transactions. You could use cell notes in the sidebar to write some remarks but it was uncomfortable.

Introducing Comments. The new Comments feature allows you to add description of the specific transaction right into the text of the cell. So now, you can write the following “100(Dress)+200(Jeans)”. The cell will still show you 300 but the full text with the comments is now saved.

Another additional to this is that we simplified how you can see the cell’s contents without pressing “Enter” on the cell since it enters an edit state, which is not something you might want. You can now see cell’s content both with keyboard and with a mouse.

If you hover over a cell, you’ll get the text of the cell in a floating tooltip. We’re forcing the tooltips to show fast, without large delay as usual.

The second way to show the details is with a keyboard. When standing on a cell press the Space key. A floating window will popup to show the cell’s content. Press any key to remove the window or click somewhere with the mouse. What’s good is that unlike pressing Enter it doesn’t enter edit state and you still see the sum of the cell.

We’re very happy with this elegant solution to keeping track of your expenses details. We’re sure you’ll find this new ability very convenient.

We’ve added support to add notes to your scenarios, if the scenario name doesn’t hold enough information to differentiate them. To enter a note for a scenario, select a scenario in the sidebar and from the scenarios menu on the bottom or in File/Scenario click “Scenario notes…”.

An dialog will open where you can enter the text. To see the notes you can either open the scenario notes again or simply hover with the mouse over the scenario name in the table the notes will appear in a tooltip. It couldn’t be any easier to remind you what this scenario stands for. 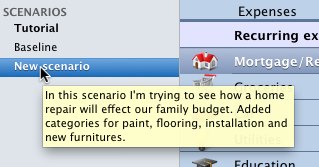 Cashculator 1.2 also fixes some bugs that we and our customers have found. one major bug was related to disappearing totals for customers who move time zones. Another bug could cause issues when using password protection.

Cashculator 1.2 is a must have update for all Cashculator users. And it’s a free update, so there should be no regrets. Download Cashculator now.

Cashculator 1.1.6 has been released with the following new features:

There was a bug in Cashculator 1.1.4 and average plan calculations. Release 1.1.5 fixes this bug. All users are encouraged to update their copies.

Hit “Check for updates…” in Cashculator’s menu or download the new .DMG from the site.

A new newsletter was also sent out to all Cashculator subscribers. Including news and Cashculator tips. Check out previous newsletters at and subscribe from the same page.

A bug was present in Cashculator 1.1.3 that could cause Cashculatorto hang in some cases when switch plan to average mode. Thanks to Dan for finding this and leading to the cause. Full release notes:

As usual, autoupdate from Cashculator menu or download from http://www.apparentsoft.com/cashculator/download